Why Merge Cubes are only $1 at Walmart

Back in October educators in different communities to which I belong were posting about Merge Cubes and how cool they are. And they were cheap - only $15. If you bought the headset then they pushing the $85 range, but you could have a cool augmented reality (AR) experience without it. And I kept thinking about getting one, even thought about giving them as gifts at the holidays, but for some reason I didn't.

Then, Tuesday morning my Facebook feed was full of people saying "Merge Cubes at Walmart for $1!" And by lunch time I had ten of them. Today I brought two of them to the library and played with one for a bit only to find that my Samsung phone is not entirely compatible with it. So I handed the Cube to a student who is in my help desk course and asked him to play with it for a bit.

First, a bit about the student. His semester-long project is focused on practicing and modeling project-based assessment techniques, particularly ones that involve technological applications, that could be used across the disciplines. He is hoping to model for both his teachers and his peers ways in which students can demonstrate learning and growth in ways that aren't commonly used at the school. In short, and closer to his words, he wants to make doing projects fun and interesting while convincing people he has learned something. And, he is starting with AR. 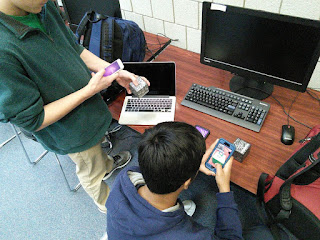 Back to the Cube. He played with it for about 30 minutes, said "Thanks! That was fun." and went to his next class. A couple of hours later he came back and brought a friend. He said, "I was hoping I could show him that Cube." I handed them two cubes and got out of the way.

In the span of 45 minutes here is what happened:

1) The two students were joined by four more. And this was a group of average students, a little bit techy, into games, fairly studious, athletic, well-liked and respected.

2) They installed a dozen games on their phones (mostly iPhones).

3) They played and laughed a lot and loudly.

4) They figured out how to share a game code and play together.

6) One of them took a picture of one of the triggers and turned his phone to another student. That student scanned the image of the trigger and launched a game. And they all stopped playing.

7) They gathered around the table and took pictures of all the sides of the cube. They loaded the pictures into a Google doc, printed it, and folded the sides into a paper cube.

8) They scanned it and it worked.

11) They went back to the Google doc, enlarged one of the triggers, printed it, scanned it and launched a game. Their hypothesis was proven true: the larger trigger rendered a larger AR experience.

12) They planned: "If we take one trigger, cut it into smaller pieces, enlarge all the pieces on the copier, and reassemble it, then we can lay it on the floor and take a tablet to the second floor and scan it from there for a massive display!"

Who knows if that will work. But, the last comment one of them made was:

I sent them home to learn Metaverse.