Get Your Game On!

Last year I was very invested in exploring whether and how game-based learning can enhance student engagement and mastery. I approached this study from multiple angles: 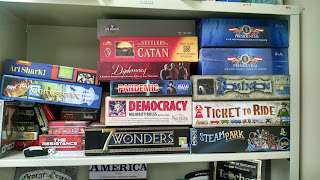 First, a bit more reflection on the three prongs to my exploration last year. In preparation for bringing games into the classroom I did some reading on game-based learning and how it differs from gamification. I read reviews by educators and gamers of different games that I thought might compliment my curricula and accumulated many new board games and lots of links to online games. To begin, invited fifteen or so students to stay after school on a PD early dismissal stay and play the games. I bought them pizza and watched while they self-organized and played. At the end of each game I asked them to fill out this form and give me feedback. The most enthusiastic feedback about one of the games was: "This game is different than any game I have ever played before. I think this way of learning about living life back then because you get so competitive, that you feel the stress of creating a life for yourself. I would love to play these games every week to learn! It is such a creative idea! It gives so much depth to learning with games overall because you learn how to reflect on a mistake, use your resources to your advantage, what the other players in the game can do for you or hurt you...etc. It is also really interesting to play a game that is so complex and difficult, I didn't know they made games like this!"

Some of the games were too easy, some of the games were too complicated and that is important to know and gave me insight into differentiating. I found this comment very interesting: "But for use as an educational tool, I cannot honestly advise much. From what I played, the only facet relating to government was the interaction between players in trading resources. Diplomacy is a fairly important part in the gameplay, especially when others have accrued resources you need. But there are no tariffs, no taxes, and no lengthy customs processes that need to be navigated to trade goods." Clearly, there is much to be learned from the right game -- this student needs a more sophisticated challenge. I replicated this session throughout the year making use of periods during the day for independent study and students continued to review new games as I found them.

ClassCraft gamified my ninth grade classes. I adopted it as one of many strategies for engaging and focusing a particularly rambunctious groups of students. I found it somewhat useful in that regard. Rather than assigning points certain formative experiences, I used ClassCraft competitions. I still accumulated the information I needed and students engaged in showing me what they new and could do without feeling "hyper-assessed". Again, my goal was much more about game-based learning, but this tool was helpful for behavior modification.

After a semester of working in these two modes, I felt ready to meaningfully introduce games as part of the learning experience. My classes were 1:1 Chromebook so I could incorporate online games for this. The Redistricting Game is a great one for illustrating the principles of gerrymandering and the complicating factors in creating legislative districts. There are multiple levels to the game so students can work at their pace. No matter how far a student manages to progress, there is meaningful choices they have to make and on which they can reflect to compare the game experience to historical or current events. Building on the ClassCraft experience and knowing that I had many students who were heavily involved in fantasy sports leagues, I created a Fantasy Election that we ran for the entire semester (beginning with the Iowa Caucus through the June primaries) to learn about the process by which the major parties select their candidates. Hands down, this game is one of the best things I have done as an American Government teacher. Students were tracking poll data, researching donors to and endorsers of different candidates, watching debates, and generally engaged in current events at levels that they self-reported were unprecedented and meeting outside of class to strategize. Some students reported that they would not be paying attention to this part of the election process if it weren't for the game and now they can't stop! Parents contacted me to say that the game and strategizing for draft days was the focus of dinner table conversation and that they had previously not appreciated how intellectual and savvy their child could be.

Students also made games. Some students made games to show how the legislative process works, others to illustrate the stages of the French Revolution and still others as an artifact component to a longer research process. For each of these projects I outlined specific criteria, and we had a game-playing day where the students gave feedback on the content accuracy, creativity, and playability of each of the games.

What I am wondering now: how can I get teachers to play the best of these games so they can see how the games call for students to have background content as well as require that they collaborate, strategize, and think critically? Once they play, then they can determine the best uses for the games in their classes and I can help facilitate the play. In addition, I would like to set up game stations in the Library Media Center where we can run content-related games for students to play during their free time. I think it would be really cool, in addition to a MineCraft station, if we have a station for Sid Meier's Civilization. I would love to hear from anyone with experience doing this, particularly at a high school!